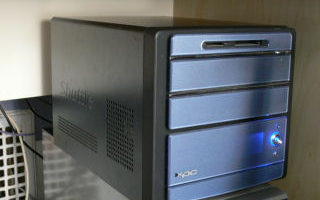 Can’t say much about it.. this is just initial view to see the specifications on it. For you who are interested… you know who you are 😉

The machine is complemented by an Acer LCD-monitor, and is using the DVI-plug feature. This is to ensure optimum image quality. And personally, I can see the difference between analogue and digital signals from the graphics card.

Of course I also have this yummy Logitech Cordless DiNovo keyboard, which fit the picture nicely 🙂

You can see a picture of the lcd-monitor and the keyboard combined under Miscellanneous.

I initially built it with an ATI Radeon X1300 PCI-E graphics card, and 1gb memory. However, in 2007 when Windows Vista was released I realized it was time to get some extra memory. So for my birthday, I kindly asked Jesper (my boyfriend) if I could purchase some a module of 1gb RAM, and then he could have one of my 512mb ones. He agreed and it brought me up to 1,5gb 🙂 Also my video card was getting a bit slow, so I purchased the fastest video card my poor PSU (350w) could handle power-consumption-wise and stuffed it in.

I’ve also realized in February 2007 that the socket 939 was being outphased so an upgrade to an X2 CPU was imminent. The first CPU bought with this machine was an AMD Athlon64 3000+ CPU (1.8ghz).