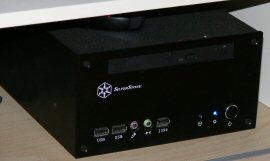 My Mini ITX project started some months earlier than I have previously realised. My current server-machine, Compaq Presario 700EA which I bought in February 2002 was beginning to rant a bit too much. The fans where noisy, locking up occurred frequently and well, as a server machine with only 386mb ram with 16mb already assigned to the built in graphics card, it seemed appropriate to finally replace it after 5 years use.

My biggest problem during upgrades or new purchases of hardware that I am to use personally is time. I spent a lot of time researching, thinking and then researching some more. “What are my needs?” seems to be the general thought in my head. So I start to define my needs.

These factors above seem to be my basic needs. With silent I mean basically noiseless. If I can get a computer that has no fans, that will be very lovely. The PSU should also have no fans. Mix that with low power usage and you can almost say that computing power is non-existent.

I managed to stumble across Via Technologies mini-itx standard which apparently defines a small form factor, which again can be accommodated in a small chassis with no fans etc.

Based on my newfound knowledge I started to browse forums, articles and whatnot about mini-itx htpcs (Home Theater PC) media centres if you like. I found out that Germans apparently are very fond of it, so I had to read German articles! 🙂 After 1 or 2 months of browsing and looking for the best of the best itx-board that best suited my needs my choice fell on the following configuration:

The only problem I see with the motherboard is the lack of memory banks. I’d really like to stuff another 1 gig module in it. As far as I’ve read, the chipset (CX700M2) supports it. Via just didn’t build it onto the motherboard. Luckily, as Mini-ITX is a standard, I can replace the motherboard when I find a new suitable choice!

Software-wise I’m going to run the following configuration:
Windows Server 2003 SP2 (Standard or Enterprise edition)
Active Directory/Domain
DNS
Filesharing
IIS with PHP ISAPI plugin (for my developer-projects)
Terminal Services (I use remote desktop for those long download-sessions)
MySQL
Exchange 2003 or 2007 (I know, memory hog, but at least 2003 should be able to run)
MediaPortal or SesamTV (as the Media Center Software).

The thing about this project is, as you can see. I want to use this machine as the main entrypoint of all file-activities and music/pictures/videos are supposed to be placed on this. I am not bothered to put in a tv-card, because, with todays flatscreen TVs they all have built in digital tuners. And to tell you the truth, I don’t watch much TV. The series aired in Denmark is nothing of my interest. Science Fiction series like Earth: Final Conflict, Farscape, Stargate SG1/Atlantis, Star Trek: Voyager, Andromeda on the other hand is.

The motherboard supports a PCI-card though. So if you’re planning on building a configuration like mine, take note that the LC12 chassis I chose does NOT have space for the expansion.

Parts are fun!
Okay, so I ordered the parts, and here’s what I got: 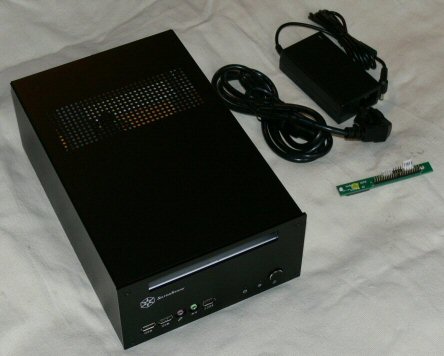 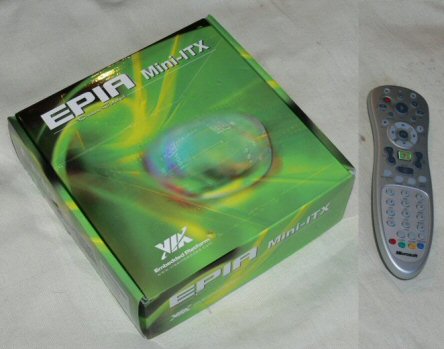 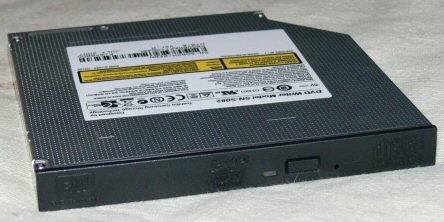 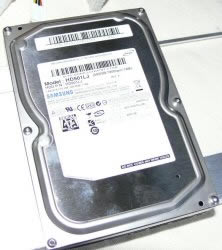 The first picture shows the casing and the supplied powersupply. It also has the little converter-thing which is used with the optical drive that I bought.

Second picture is the box containing the VIA Epia EX15000G motherboard, also I edited the image, so it contained the MCE remote as well.

3rd and 4th picture are the optical drive, and the harddrive.

Casing, internal cables and converter-thingie
When opening the case you’ll notice there’s not much space in there, but there’s enough 🙂 On the pictures you can see the overview of the case when opened (I’ve pulled the optical “drive-bay” out, which many other sites show). You’ll also see the individual cables and notice the SATA-powercable! That wasn’t in earlier versions of the case. Buying it in 2008, if it’s still around, should get you that SATA powercable built-in in the case. 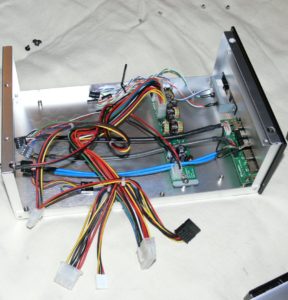 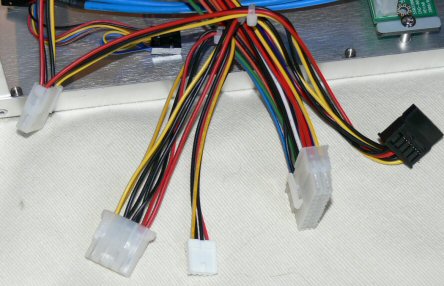 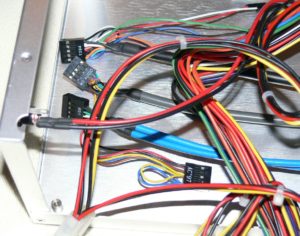 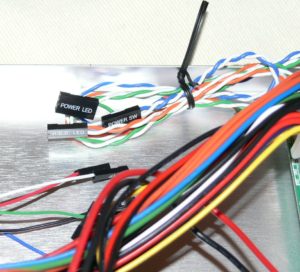 External cabling only includes the lovely powerbrick. Mine is not noisy, not that I’m aware of anyway, so if you buy one that has a high-pitch tone.. get it replaced, cause it shouldn’t make noise. 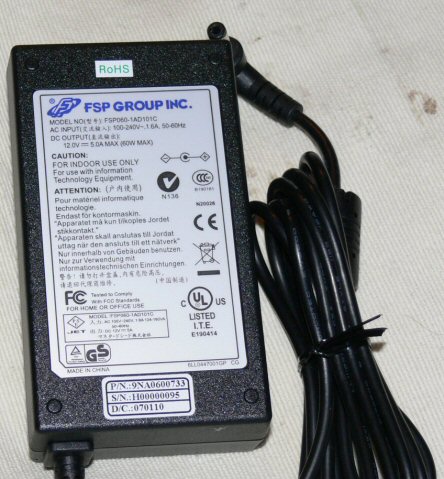 VIA Epia EX15000G motherboard
Opening the box containing the motherboard reveals a cute little mobo with many many many connections. I don’t think I’ve seen so many internal and external connections on so little space! I’m sure in future Via will release motherboards with even more connectors, but already today, this is quite impressive. 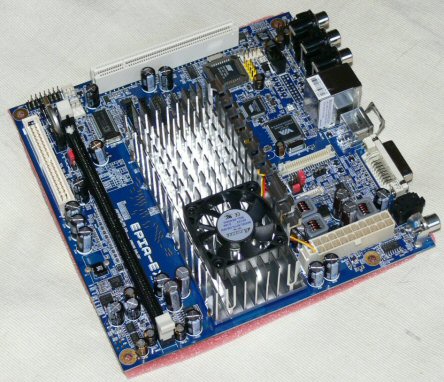 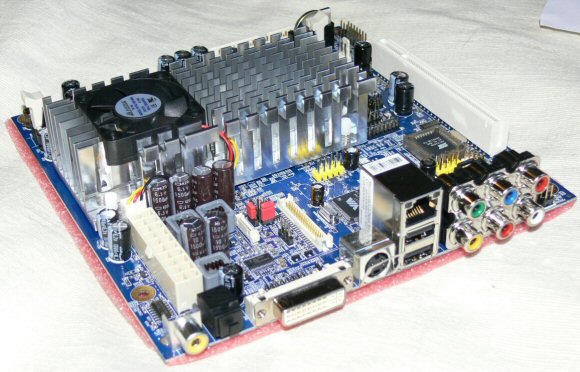 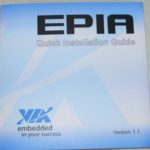 Optical Drive connector
The optical drive is from world renowned Samsung. Most people know them for their beautiful design televisions, some for their mobile phones, but not too many know that they actually also make computer peripheral devices like computer monitors (that shouldn’t surprise anyone though), harddrives and optical drives. And their quite good at it too. I haven’t looked into if they use a subsupplier like Matsushita or anything else Taiwanese, but that could be the case for their optical drives anyway. 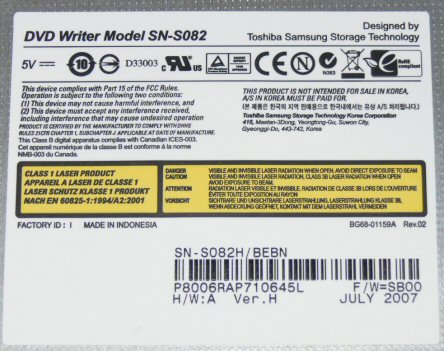 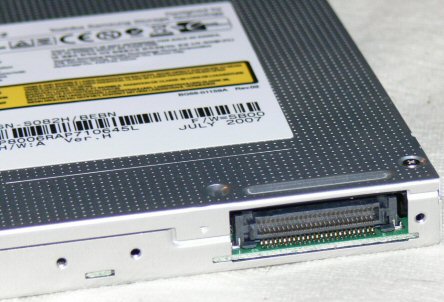 Assembly
The whole thing was quite easily assembled. The only thing that can be tricky is the front USB-connectors. Very annoying, and it was quite by luck that they’re actually working!

I assembled the whole thing during one of my raids in World of Warcraft, hehe. In between the breaks that is. It was hard to not toy with the new little wonder, when you actually had to concentrate on doing damage to creatures in WoW. Ah, anyway… here’s 2 pictures of the assembly. 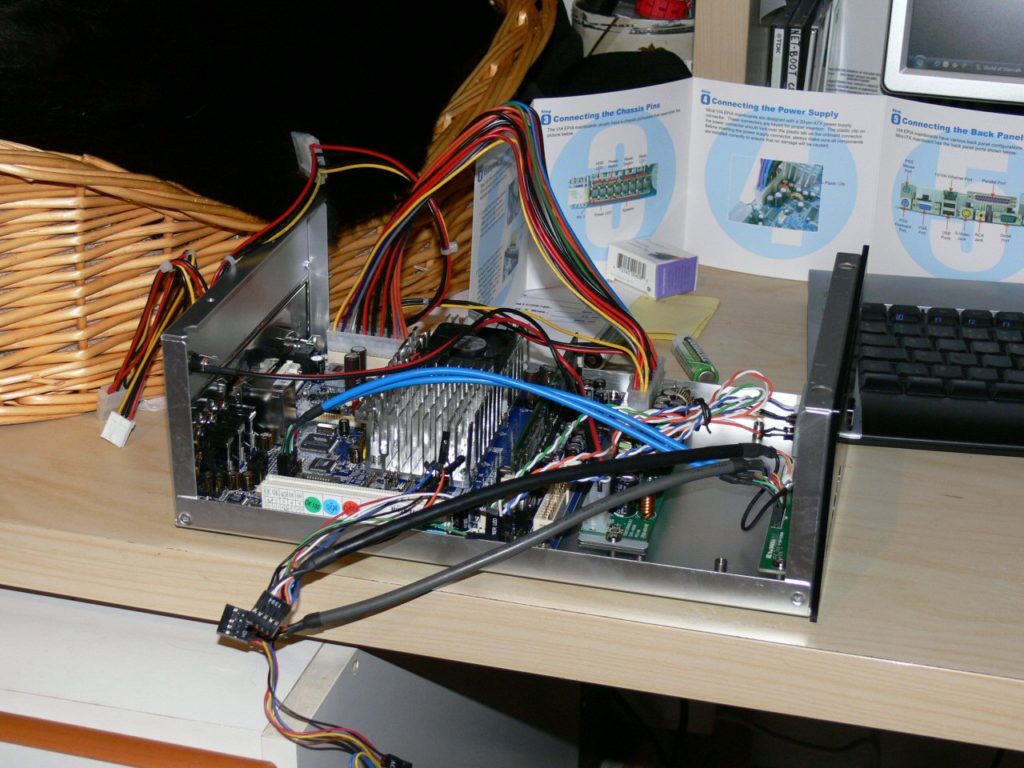 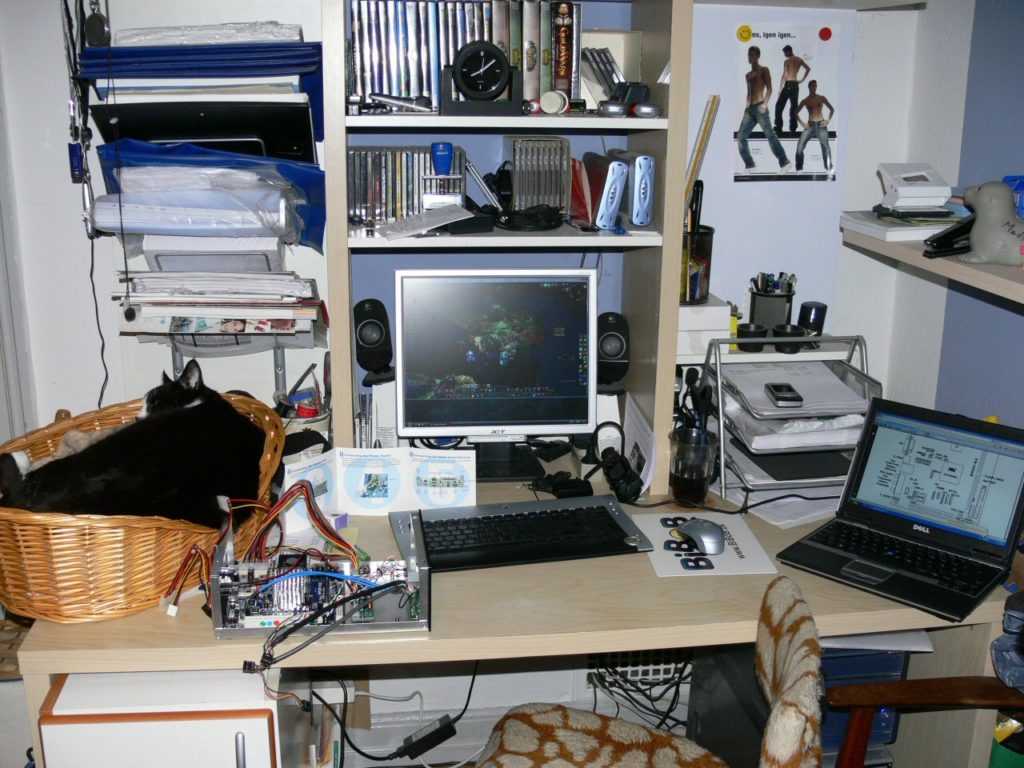 Okay, so on the left, yes, there’s a cat… then you can see the wonder getting assembled. On my right is a Dell Latitude D430 which I have from work.. very nice subnotebook by the way! And of course in the middle I’m playing World of Warcraft.

Software, drivers etc
Installing software was quite easy. It’s the usual, boot from CD, install the Server 2003 software, install some drivers to the newly installed system and install the programs you want to use.

One driver that was a bit difficult to install was the MCE Remote. Take note, that there are no drivers included on the Server 2003 Operating System. Windows XP Professionel (SP2 and up) has, Windows XP Media Center edition also have drivers for it. So you need to do a manual copy of the files to be able to install it on the Server 2003! Once installed it works perfectly for what I need it to do. Hence the Media Center button doesn’t work correctly, cause there’s no Media Center software to start… take note to set Power Options so your standby-buttons etc, doesn’t make your computer turn to standby, if you’re running it like me!

After 2 months (January 2008)
… usage I can genuinely say that I am somewhat satisfied. IF you loose connection to the server, it’s because of the crappy built-in network card! I’ve experienced a breakdown of the connection on it a couple of times. It seems if it’s crowded on the line or so to speak, then the network card is in risk of shutting down/stopping working until after a hard reboot. The machine functions normally, there’s just no connection in or out of it. So let this be a warning. VIA RHINE II Ethernet adaptors suck 🙂

UPDATE (December 2008):
After roughly 1 years usage I’ve managed to port the machine into a virtual VMWare PC on another computer, kept it running while I formatted and installed Windows Server 2008 on the machine together with Exchange Server 2007 SP1 – It’s running fantasticly.

I am however, not using it as a mediacenter-pc anymore. It didn’t have enough computing power to run the more demanding High-Definition movies. Instead, with our flatscreen Zepto 37″ television we bought a Kiss 1600 Media Center machine which handles movies somewhat ok. We tried running Disney’s Kung Fu Panda in HD (720P) but either the wireless connection cannot keep up, or the computing power of the mediacenter is too low.

The noise is still pretty low. The fan has been spinning for quite some time now, and it hasn’t gotten any noiser. That’s lovely! The biggest noises coming from the server, is actually the 3,5″ HDD when it loads stuff.

I’m already thinking of a replacement, and it seems HP (Hewlett-Packard) have built a nice little machine called the dc7800 USDT. Quite small, quite powerful – however the fans in it seems a bit noisy for my taste. Maybe the dc7900 can perform better, noisewise 😛 Or maybe I’ll just wait a bit longer… 🙂