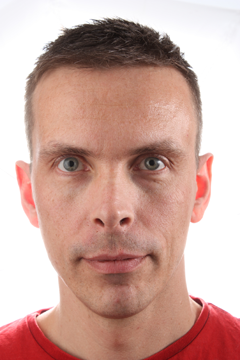 Hi, this is my husband. My lovely husband. We met kinda funny. One day, when I was surfing the net, I got a message on my ICQ from an unknown sender. I looked at it and didn’t know who it was. So I wrote to ask. Then a message came back ‘Who are you?’, it said!?!? Very confusing 🙂 That was the beginning of some instant messaging sessions and some emailing back and forth.

Some months later, my old boyfriend and I broke up. I was devastated and didn’t know what to do. Another friend of mine asked if I’d like to come to Copenhagen for a weekend. (I still lived on Bornholm then). I said yes and me and Jesper also agreed to meet each other the saturday I was going to be there.

Finally the day came, where Jesper and I was going to see each other. The same morning Jesper and his boyfriend had broken up, only by coinsidence I guess. We met ‘Under uret’ (under the clock) in the Copenhagen Central Station and I remember when I first heard his voice he said ‘Så står du bare der’ (translated loosely to ‘So there you are’). The first thing that stroke me was his very deep voice. It actually isn’t that dark, but it almost startled me back then.

We went for a walk in the streets of Copenhagen and after half an hour we decided to go to Jespers’ place. There we had something to drink. His telephone called and I sat in a chair of his when suddenly he started to touch my leg, which lay pretty close to were he sat.

Anyway, we ended up together as boyfriends a month later and have broken up a few times since then.

19th July 2008 – Back in the days (1½ years after we first met) I wrote that our relationship seemed like it could be permanent. And guess what, he asked me! He was down on all 4 cleaning the floor when he said “Shouldn’t we just marry” (or something like that) – And now, approximately 6-7 years after he asked we finally did say “I do” to eachother. Why the long wait you say? Well, personally I really don’t like to take a loan “just” to have a party, so that’s basically why. That, plus it hasn’t been a big priority for us.