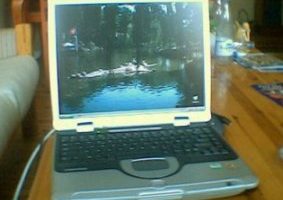 I just want you all to know. This is my beatiful notebook. Since I first laid my eyes on a pc like this, I’ve wanted a notebook. This wish of mine came true 13 February 2002, when I bought myself a Compaq (never liked them!) Presario 700EA. The model was somewhat outdated, cause it didn’t have a DVD/CDRW drive in it and it hadn’t crossed the 1ghz barrier.

Anyway, the graphics card really surprised me. It performs pretty well in the games I play the most (Diablo II, Starcraft Broodwar, Age of Empires 2, Heroes of Might & Magic series and even Quake III Arena!!!) And we’re talking as of 16 July 2002, when nVidias’ Geforce4 chip was already out and had been for awhile.

For drivers regarding this model, always check with HP/Compaqs support site. Regarding drivers I really recommend this site too: http://www.walterswebsite.us/drivers.htm

Many Presario 700-series owners has problems with this model. If you have any problems I can recommend the site that I’ve listed in my drivers-section.

Many that I’ve heard of typically has problems with freezes/lockups, some have blue screens or BSODs (Blue Screen Of Death) as some call them.

What are these problems caused by?

Hardware
Motherboard?
Why these occur, no one generally knows. In my experience this seems to have something to do with the chipset and motherboard electronics design. As far as I know it works perfectly with the Windows 9x core (Win95,98, ME) and Linux (at least one of the many distributions).

Memory?
Some speculate that if having installed more RAM (memory) this will cause it too freeze because of bad build quality. This is not my opinion. My guess is that it occurs more frequently because Windows has more to play around with, which in turn also gives faster speeds, which makes it freeze a lot faster 🙂 But again, more speculation. I have in fact experienced lockups, when I’m only running with the built-in RAM.
UPDATE – 9 January 2005:
I have been running my computer with another brand of memory for 4-5 months now and it seems that the built-quality of this module is somewhat better than the others, since the BSODs have been decreasing in number. So buy a wellknown brand please. Kingston has the best reputation I recon.

Applications?
I’ve experienced multiple BSODs when viewing and searching in DivX-movies with the latest version 5.x.x. Apparently, running with DivX 3.20 seems to reduce the BSODs. Furthermore I can also recommend using the Xvid Codec.

Drivers?
Mostly when PCs experience lockups/freezes and BSODs, they usually are caused by bad drivers, either corrupt or badly written. But actually I haven’t heard any reasonable explanation that this problem could be driver-related, although many would initially always blame the drivers. Please correct me if you think I’m wrong

Updates?
Of course you should always make sure, that all your software is updated, both because updates can make new features available and security-exploits in software are a safety-hazard now-a-days. So always keep your Windows up2date with WindowsUpdate and check with your Anti-virus software if there’s any updates.
ATTENTION!: Although Windows has to be updated to keep vira out of your system and keeping your data safe, I have found out, that upgrading to WindowsXP Service Pack 1 causes the Presario 700EA to freeze/lockup a lot!!! My experience tells me that in between the initial release of WindowsXP and the release of SP1 for WinXP, Microsoft , of course, patched some security-holes in Windows. Some other problems was found and some other hotfixes was released and installing those also makes the system freeze. Which one it is, I have never fully identified, but my speculations are, that Q317277 and Q328310 hotfixes from Microsoft will cause the problem to get much worse.

What can I do about this?

Service Pack 2
I’ve been running with a beta version of Service Pack 2 for WindowsXP and it seems the freezes/lockups aren’t occuring more often than running without SP1. Yahoo, this is great news! However, these are just my first impressions. Please let me know if you think otherwise.
UPDATE – 9 January 2005:
Service pack 2 is now out for the masses and it seems this has proven to be more stable than ever with the Compaq notebook. If you can, get your hands on a clean reinstallation disc of WindowsXP Home Edition with integrated Service pack 2 and start reinstalling!!!

Other speculations
Other people have speculated that turning of digital audio transfer on optical drives, could help reduce freezes/lockups.

How to disable Digital CD Audio:

My story about this?

I first began to experience these problems by getting BSODs when I watched DivX-movies. For those of you that don’t know DivX, it’s a format having movies stored on computers, like VHS/SVHS or Betamax. OK, you geeks knows this might be a bad synonym, but I think non-technical people can understand it. Well. At first I thought this was the movie-file that was corrupt but later on, when I tried multiple other movies, I came to realize, that from DivX version 4.x and beyond the BSODs very many. Most of the times my computer just restarted. A “fine” fix for this was to install DivX 3.20 because this seemed to reduce the failures. So I lived with it.

Now Microsoft came with their many hotfixes, and we should all install security-updates etc, and so I did. And then even when typing in Word, playing Solitary or just browsing the net I experienced many freezes. It was so damn annoying that I reinstalled WinXP and lived with it for awhile. Then came Service Pack 1, and as the good user I am, I installed it. DURING the installation a lockup occured and you might imagine my face when I was unable to boot into WinXP after a power cycle. A repair of the existing installation helped the problem. SP1 installed this time without any noticable freezes (!!I think everyone would notice a freeze, hehe!!).

During a week I experienced a lot of lockups and I already now blamed SP1 for it , so I reinstalled WinXP again and started my analysis, by writing almost each hotfix I installed down, and waited for the freezes. You might have read earlier of which Q-hotfixes I suspect to be the sinners. I spent many hours on updating drivers, upgrading BIOS, downgrading drivers, and analysing as much as possible. But nothing helped.

Now I am a man who won’t just give up, so I called Compaq (their name was still Compaq), and explained my problem. They gave me ideas and tips that I’ve already tried, so my notebook was collected and sent for repair. You might imagine my long face when it returned and the only thing that was repaired on my notebook was my LCD screen because cracks where appearing near my LCD-hinges. (Wear and tear-damage). I gave up. Went crazy and cursed Compaq. Then HP bought them 🙂

After awhile of having installed WindowsXP without Service Pack 1 and without any hotfixes, I got a little annoyed, because I would like my computer to be protected. I was frustrated, I’d been struggling with the problem for over 2 years. I was SO frustrated that I was so happy when I one day accidentilly dropped it. I wished for the insurance to just give me a new computer, but they didn’t. During the 2 months period the computer was in 3 times, because the service center, never quite got the problems repaired. LCD, optical drive, harddrive, floppy drive, cpu- and system fan has been replaced. Only thing that needs replacement now is the motherboard, which has integrated graphics card, 128Mb RAM and network card. I removed the miniPCI modem because I don’t use it. Thought it might help.

Today the BSODs, freezes and lockups still occurs. But I’ve learned to live with it having only WinXP installed and not SP1. SP2 seems to perform well for the moment, but that could change when the masses will download it.

UPDATE – 9 January 2005:
My story continues as the motherboard apparently also was damaged when I dropped the notebook, rendering my machine very fragile. It worked yes, but if I closed or opened the lid on my machine, it would BSOD and shutdown or restart. I lived with this for 9 months, because I didn’t care at the time. But as it got worse, I packed it and sent it in for repair again. They replaced the motherboard, and it works just as if it was never dropped.

UPDATE – 9 January 2005:
I won’t make any conclusions, just say that together with a good built-quality of the added memory module, service pack 2 for Windows XP and not having DivX version 5+ installed my notebook runs just as well as every other notebook. I do have occasional BSODs, but that’s typically because of drivers going haywire or bad written software. Hopefully this should be the end of this story. Especially because I’ve bought myself another notebook!!! Wooohooooo… the Acer Ferrari 3200!

If anyone has any good ammendments, please let me know. I will add them