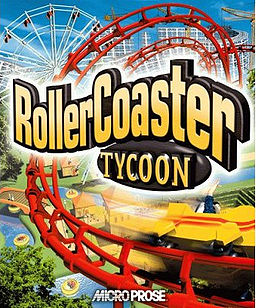 his game has also been a favorite of mine. It was released in March 31, 1999, and quickly became a de facto standard in amusement park design-games 😀 Well, at least it was my de facto standard, haha. Chris Sawyer is the mastermind behind the game, and he really has thought of a lot of things in this game.

Your start of with a park. You have an objective to fx have a park rating of at least 600 with a company value of at least 10000 dollars by october, year 3. Now it’s your responsibility to build rides, create path and queuelines, set prices of rides, built custom made rollercoasters or even design your own ones. People will quickly start pouring in and you gain revenue to build even bigger rides. You also have a research department, where you can adjust funding and decide which types of research your employees do. And speaking of employees, you’d better keep your park clean with handymen, safe with security guards, entertaining with walking entertainers and of cause mechanics to keep your rides in top shape! Otherwise, guests might die in crashes, complain about littering in the park or even vandalism!

Many aspects of maintaining an amusement park has been thought of in RollerCoaster Tycoon. And with the expansion packs, Corkscrew Follies and Loopy Landscapes, multiple new scenarios and objectives where added to the game.

Althought RollerCoaster Tycoon has been followed by a sequel and a third game, I’ve only really played the first one. Why? I’m not sure. Maybe it was because #2 just seemed so much like the #1 and I’d just stick to the first one and complete it entirely (which I haven’t to date! July 27, 2010).

A word of caution. If you retrieve this game, I can assure you, it works on Windows 7, 64-bit – but save your game early and often, as it could crash multiple times without warning. What crashes it is unknown to me, but it has happened enough times for me to remember to save my games 🙂 But not enough times, for me to not play it!